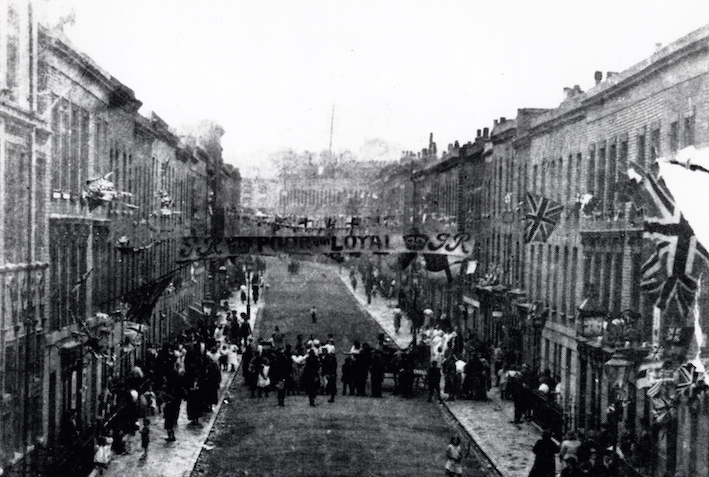 I first heard of Campbell Bunk some time in 1971. I was then a public health inspector working for Islington Council and my district was on the south side of the Seven Sisters Road. On the opposite side, close to Fonthill Road, was a fag-end of a street with no houses in it leading to a council housing estate. The street sign said Whadcoat Street, but there was still just visible ‘Campbell Road’ painted in black letters on the side wall of a shop in Seven Sisters Road that revealed that this had been the site of the notorious ‘Bunk’, the so-called ‘Worst Street in North London’. Its reputation was still lively among locals who remembered the area before the Second World War. It was known as a rough and lawless street which no outsider would venture down and where even the police would patrol, it was said, in pairs. From around 1977 I set out to try to tell the story of Campbell Bunk by talking to people who had lived there between the wars. I found I had somehow to make sense of a contradictory place, for this was a close community where people would steal from one another. It took me around eight years to unlock some of the street’s mysteries and unpick its many myths.

Not too far away from the Bunk was New Court Congregational Chapel in Tollington Park. The congregationalists had moved here in 1866 from New Court, Carey Street, demolished to make way for the Law Courts in the Strand; they had been there since 1705, but their nonconformist origins stretched further back to 1662, and to Covent Garden, where their first minister had been expelled from the Church of England. New Court had been in Holloway less than ten years when the godless reputation of Campbell Road began to receive much attention locally. It set up a ‘mission’ in a room in the street in 1875, and in 1880 a Sunday School for Campbell Bunk children, also in a house in the street. In 1884, New Court opened a purpose-built mission at Lennox Road, again directed pretty much exclusively at Bunk residents. It ran a boys’ club, a girls’ club, a Sunday School, a home institute for wives and mothers giving domestic instruction (cooking, making and mending), a savings club, and a men’s club (teetotal of course). It remained open through two world wars and the superintendent of the boys’ club, in particular, was loved and respected by those ‘Bunkites’ who benefited from the club’s activities.

Despite many of the people of the Bunk being some of the poorest Londoners of all, the street was a very patriotic place. There was always money for flags and bunting and a street tea for the children to commemorate any royal or national celebration: a banner would be stretched across the street at moments like these proudly proclaiming, ‘Poor But Loyal’. So it was that in 1914 the young men of the Bunk responded vigorously to the nation’s call to arms. In early 1917 the Islington Gazette summed up the street’s astonishing war record:

Campbell Road is as patriotic a Road as any in Islington. Three hundred of its men have joined HM Forces, and over 30 have made the great sacrifice. Campbell Road decided to have a War Shrine, and on Friday this was unveiled by the Mayoress of Islington. It is a handsome and imposing memorial, and has been set up outside number 11….

The wooden memorial fixed to the house wall recorded the names of the Bunk’s fallen, inscribed by an itinerant sign-writer (‘Sailor Signs’) who lived in the street. Sadly the memorial has been lost, and with it the names of the Bunk’s fallen, unless it’s still to be found somewhere in an attic or cellar. Many poor streets had similar memorials but few of those have survived either. It’s marvellous to think that there was another memento of the Bunk’s young soldiers in the Hunter memorial organ of New Court Congregational Chapel, as it then was. Four Bunkites have been identified by the restoration project’s diligent researchers: George and Freddie Pocock (a large Bunk family, related to other families in the street), Dennis Keegan or Kegan, and Ambrose Gillot (one of another large family, eight persons crowding into two Bunk rooms in the 1911 Census); perhaps more might be identified as research continues.

The Bunk was lively enough between the wars, but during the Second World War it became increasingly deserted, its houses badly worn out through generations of multiple occupation. Ironically, it survived the blitz and the V-weapons virtually unscathed. It was eventually laid to rest, as it were, by Islington Council, in one of the borough’s first slum clearance schemes after the war. Haden Court was built on the site.

Campbell Bunk. The Worst Street in North London Between the Wars, first published in 1986, was reissued in 2003 by Pimlico. It is in print in paperback and also available on Kindle.

Visit our YouTube channel to watch an interview with Professor White talking about Campbell Bunk at the time of the First World War.