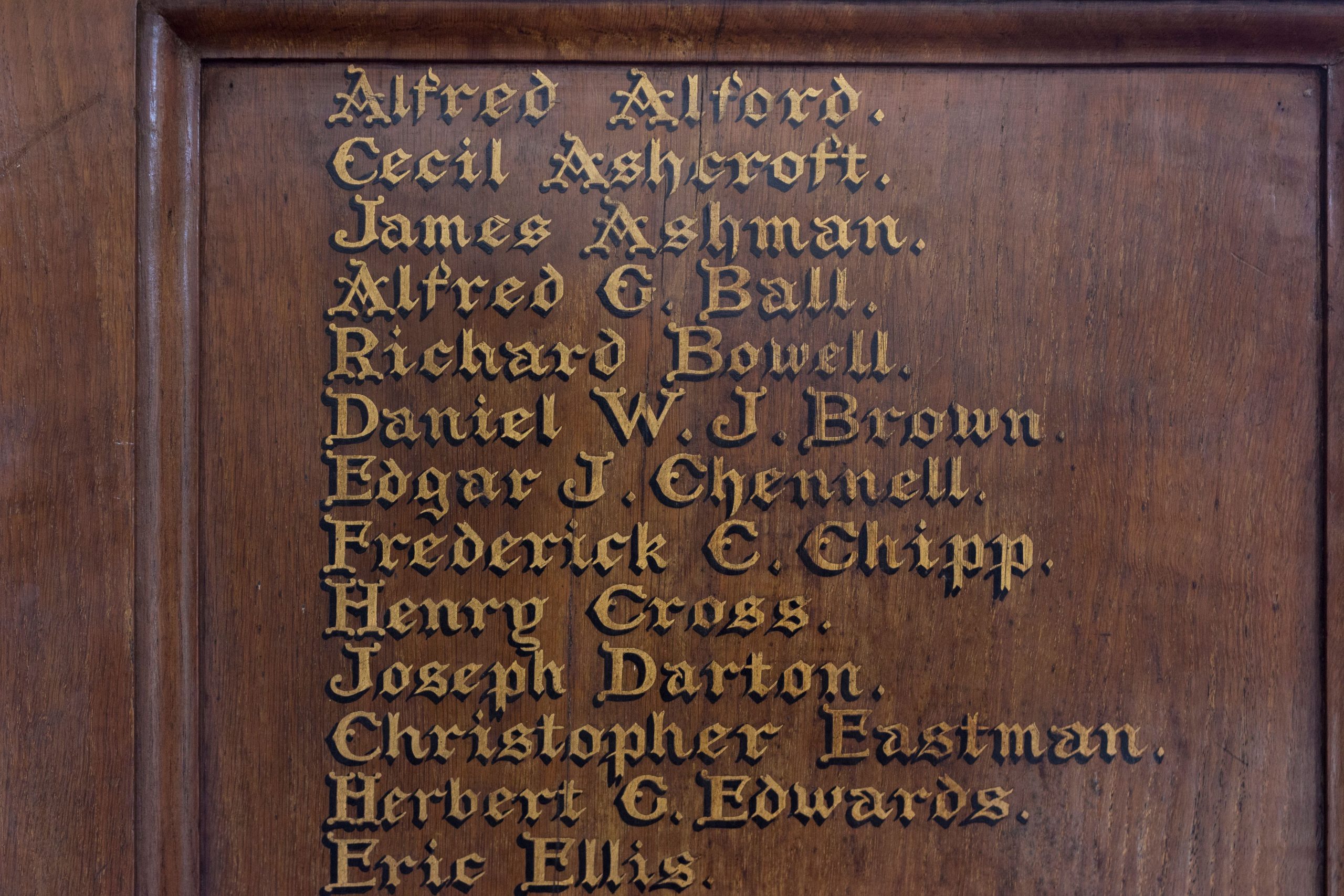 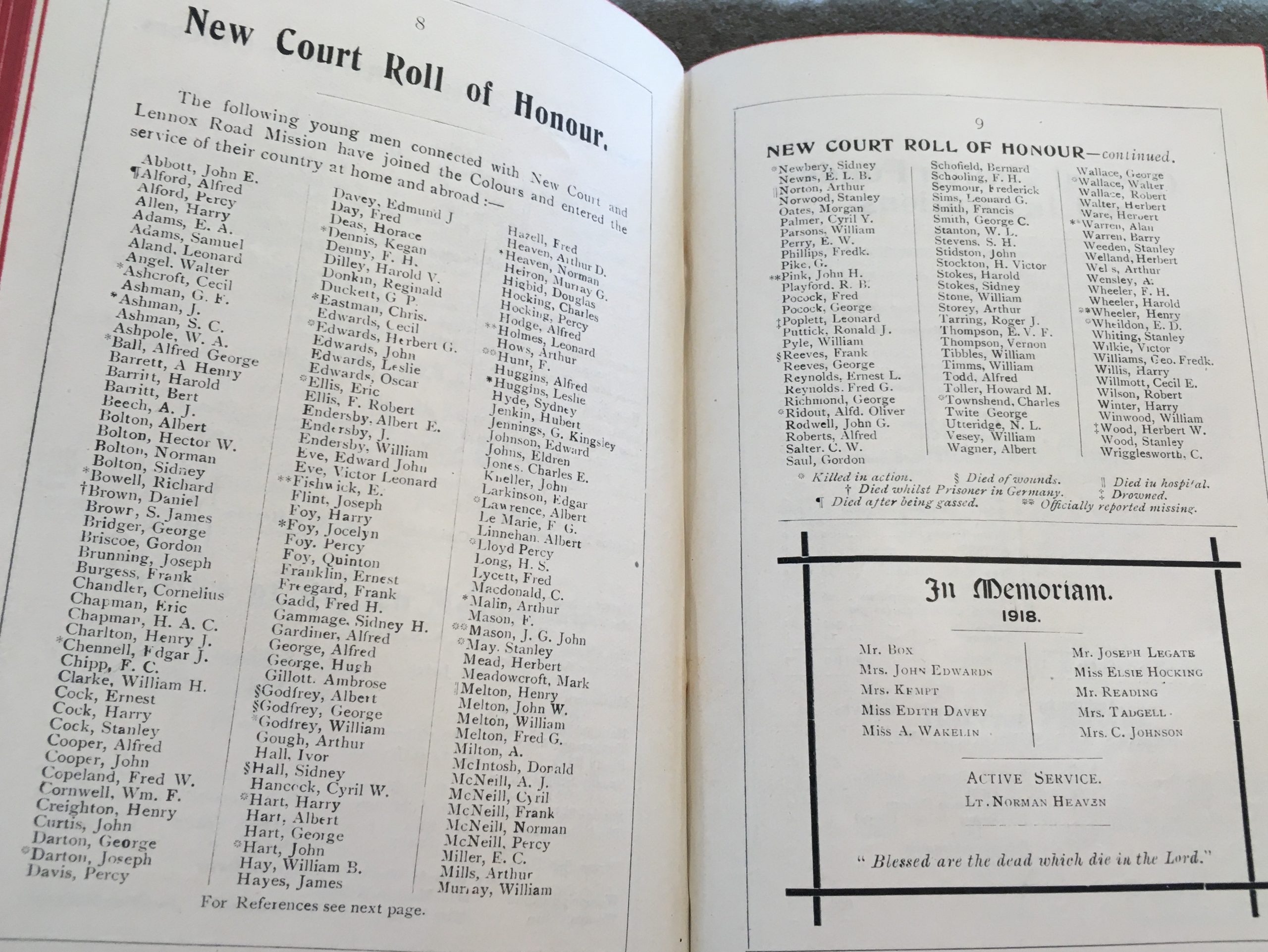 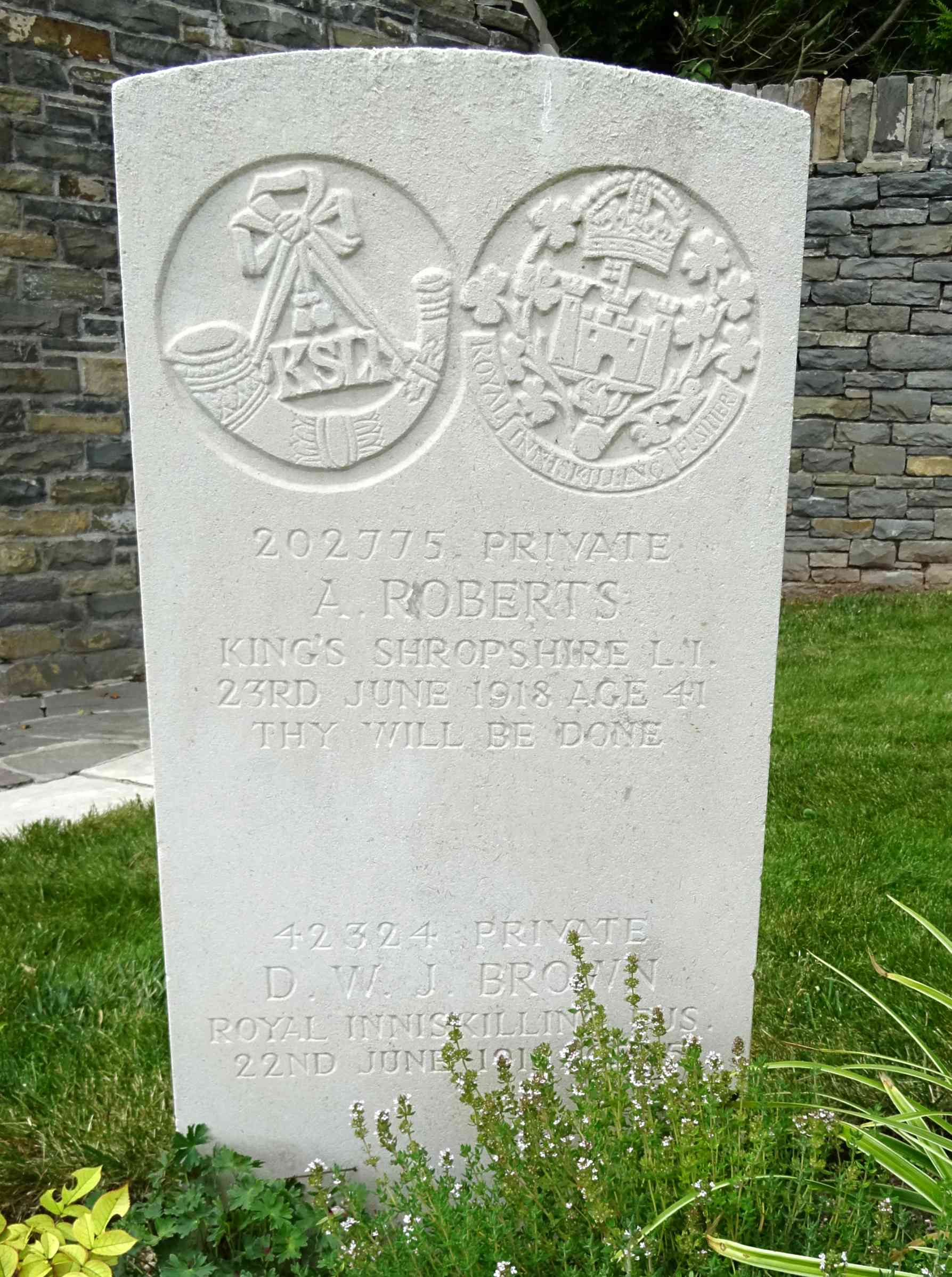 Gravestone at Sarralbe Military Cemetery, shared with Private A Roberts of the Shropshire Light Infantry, www.findagrave.com

At first glance, writing Daniel Brown’s entry for the database on this site appeared a straightforward task. Relatively few records of him existed online and there seemed little to separate his story from those of countless contemporaries who had fought and died on the Western Front. In fact, I was about to learn that although his was not an uncommon fate, it was no less remarkable for that.

Born and raised a couple of streets away from New Court Congregational Church, Daniel lost his father before the First World War and did not live to see his mother and five sisters again after it.
He enlisted with the Army Service Corps and later joined the 2nd Battalion of the Royal Inniskilling Fusiliers, with whom he served in France and Flanders. He died on 22 June 1918, six days after his 25th birthday, and is buried at Sarralbe Military Cemetery in the Moselle region of eastern France.

Why Daniel changed regiment was not immediately clear and it was also notable that his place of enlistment was not north London (or even Northern Ireland) but northern France* – in Le Havre, Normandy, where the 2nd Battalion landed in August 1914.

I learnt that 13 battalions of the regiment had fought in the First World War, not just on the Western Front but as far afield as Gallipoli, Salonika and Palestine. Some 5,890 of the regiment’s men had lost their lives and eight were awarded the Victoria Cross. They were also engaged elsewhere – members of the 12th (Reserve) Battalion fought against Irish rebels during the Easter Rising of 1916 in Dublin.

My first clue that there might be more to Daniel’s story came on a visit to the London Metropolitan Archives in December 2020. New Court Congregational Church published a manual each year and, during the Great War, this volume included a Roll of Honour listing the local men fighting for their country. Next to some names, a text symbol such as an asterisk denoted that they had been killed in action, died from wounds or were reported missing. In the 1919 volume, a small dagger – an obelus – beside Daniel’s name confirmed he had “Died whilst prisoner in Germany”.

I returned to the Commonwealth Graves War Commission website, and looked again at a picture of Daniel’s headstone. It showed he shares a grave with Private A Roberts, of the King’s Shropshire Light Infantry, while a footnote – previously overlooked – told how Sarralbe was built by the Germans “but now contains only the graves of Commonwealth soldiers who died as prisoners of war”.

Just 104 men are buried there, but during the First World War, a total of 10 million servicemen and civilians were captured by enemy forces and sent to detention camps as prisoners of war, according to the International Committee of the Red Cross (ICRC). An estimated 192,000 of these, the National Archives website estimates, were British and Commonwealth servicemen.

Although I could find no record of how or when Daniel became a prisoner of war, I came across research by First World War historian Michael Nugent into a soldier called Private Patrick Connolly that offered clues to Daniel’s fate. Patrick had enlisted with the 8th (Service) Battalion of the Skins, and was twice wounded before he was posted to the 2nd Battalion, with whom he fought during the Spring Offensive – Germany’s series of desperate, last-ditch attacks along the Western Front in 1918.

Patrick was captured in Saint-Quentin on 21 March, the first day of the engagement, and sent to Stendal prisoner-of-war camp in the Saxony-Anhalt region of Germany, where he spent the rest of the war before returning to Ireland in 1919. Stendal was a parent camp for a number of work camps, and could accommodate 15,000 men, and mention of it is relevant because my next discovery was documentation on the ICRC website that detailed Daniel Brown’s death at Stendal.

The three records there introduced one final twist. The first, dated 19 October 1918, confirmed that Daniel died in a Kriegslazarett or battlefield hospital. However, Stendal is more than 500km from the Western Front, so again that seemed unusual. The second, a Totenlisten or death list, gave his date of death as 22 June and the cause as Rippenfellentzündung or pleurisy. This record was dated 20 August 1918 – and importantly it also placed Daniel back on the Western Front, at Mörchingen.

The last document had been signed or stamped on four dates ranging from 17 September 1918 to
17 October 1918 and recorded Daniel’s date of birth, rank, regiment and place of capture (unknown). Beneath that, there is a single line that begins to explain his fate: “Der Gefangene ist im westlichen Etappengebiet verblieben.” This translates as: “the prisoner remained in the western theatre.”

I contacted Michael Nugent, whose book A Long Week in March focuses on the 36th (Ulster) Division but also explains in detail the fate of the 2nd Battalion of the Royal Inniskillings Fusiliers in the Spring Offensive, during which around 250 of their men were forced to surrender.

“Germany had expected the Spring Offensive to be successful, but its success proved overwhelming for them,” Michael said. “They took something like 180,000 prisoners of war in total from 1914 to 1918, but on the first day of the Spring Offensive alone, they took 21,000.

“Many were ferried to the prisoner-of-war camps but a great number were kept in France and made to work. It was forced labour, even though that contravened the Geneva and Hague Conventions. So men would not have been registered as prisoners of war until they reached a camp.

“I’m sure that’s what happened with Daniel. He remained near the front line, was made to work, fell ill, was treated in a hospital and died. The Germans were obliged to record his death but the dates on the paperwork at Stendal are much later. So while there is a record at the camp of his death, there is no record of him being a prisoner there. I don’t think he was ever at Stendal.”

Whether Daniel’s family knew of his actual whereabouts or how he was treated after his capture we don’t know. That the New Court manual places him in Germany suggests they may never have learnt the full story. Neither have we, but what we do know of it deserves to be retold and remembered.