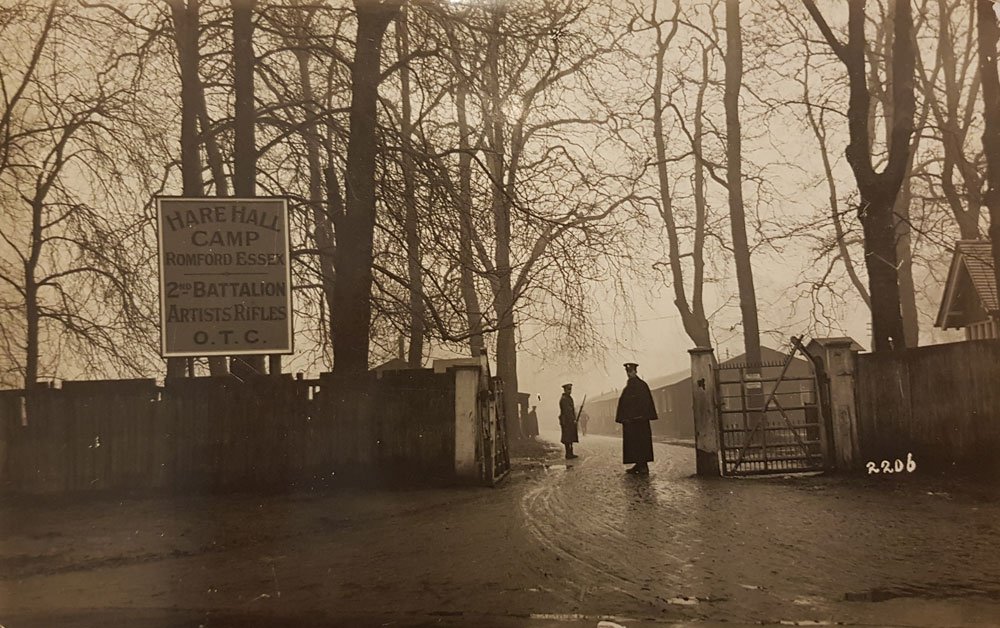 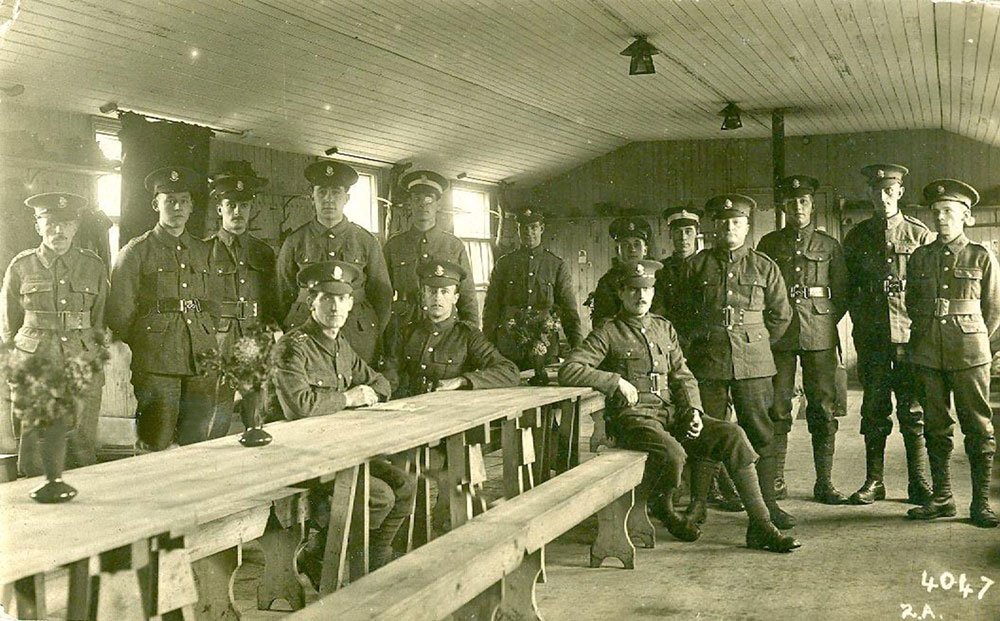 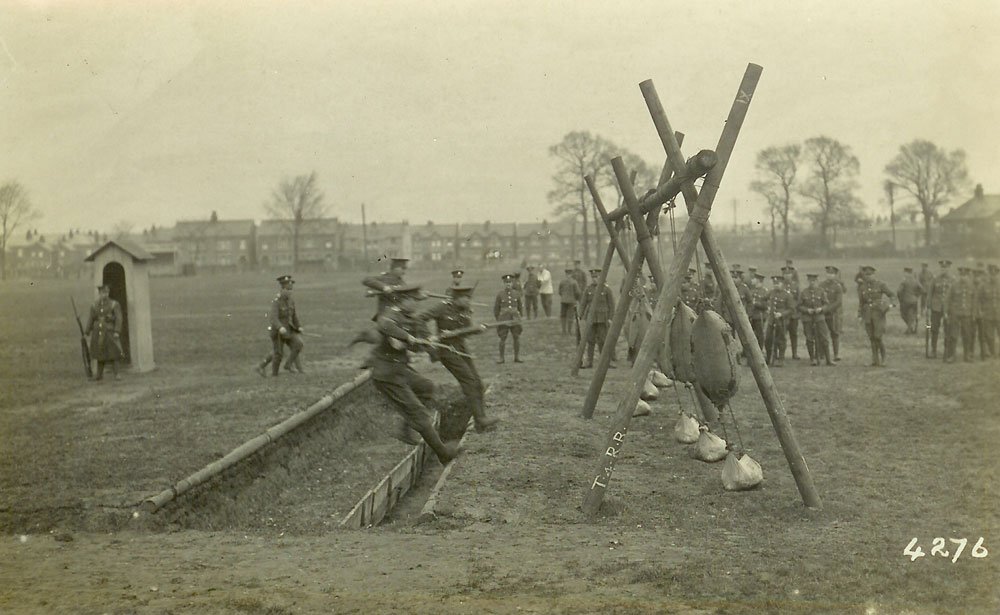 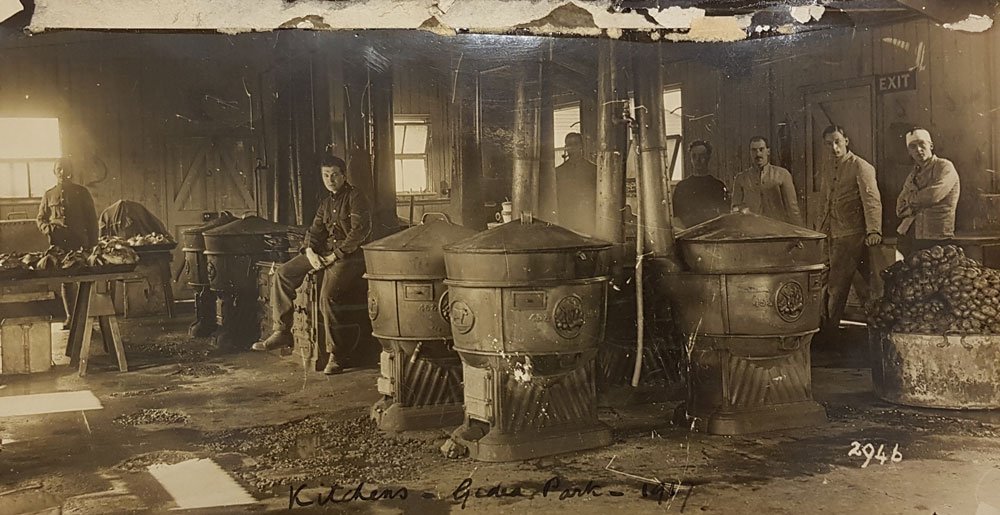 Henry Richard Creighton, known as Harry, was one of the first soldiers I researched who came back from the war. He didn’t have far to come back from – he only ever went to Essex.

Born in Hornsey in 1877, Harry was the son of Richard Creighton (1842-1909) and his wife Emma Jemima (nee Adams, 1842-1926). His father worked as a Lace Warehouseman. The family lived at 63 Woodstock Road in the 1880s and at 28 Ferme Park Road, with two servants, from the 1890s. I would say they were going up in the world. When Richard Creighton died in 1909 his estate was worth £7169.15s.4d, nearly £900,000 today. And the congregation at New Court Chapel, where he was a Trustee and for many years Superintendent of the Sunday School, installed a window by WG Langford, depicting Mary, as a memorial to him.

Harry himself became an architect. In 1906 he married Edith Annie Wells and moved to East Finchley; their daughter Edyth Jessie was born in 1908/9. At the start of the First World War Harry was practising with the London County Council.

In November 1915, at the age of 38, Harry enlisted in the Army. Perhaps he knew that he was likely to be conscripted fairly soon. In January 1916 the Military Service Act imposed conscription on single men aged 18-41, with some exemptions, and a second Act in May 1916 extended it to married men. His Attestation Form told me that he had served with the 20th Middlesex Rifle Volunteers (Artists) and left ‘time expired’; he had been a volunteer as a younger man.

Harry rejoined his old regiment, the famous, and very unusual, Artists Rifles. Many of the original members in 1860 were well-known in the art world such as Lord Leighton and Holman Hunt, but the unit also included architects, music hall performers and medical students as well as City clerks and others who joined for the Artists’ well-known social life.

By the start of the war, the Artists Rifles were part of the Territorial Force, and were known as the 28th Battalion, London Regiment (Artists Rifles.) Harry enlisted at their drill hall HQ in Dukes Road, WC1, opposite the British Library. This is now The Place dance theatre; you can still see the original terracotta entrance with the Regiment’s name and a medallion of Mars and Minerva. During the First World War the poet Wilfred Owen and the painter Paul Nash were among those who served with the Artists.

I tried to piece together Harry’s war from his file on Ancestry. He was classified by a medical board as CII; he started as a Private and was promoted to Corporal in March 1916; he was at Hare Hall Camp at Romford; his theatre of war was ‘Eastern’. He passed through No 1 Dispersal Unit at Crystal Palace in January 1919 and was ‘discharged on demobilisation’ on 31 March. Not much to account for more than three years military service, and somewhat puzzling.

At this point I was lucky to spot @artistsrifles on Twitter and made contact with their archivist, Patrick Baty. Patrick and colleagues generously told me about the regiment and what little they knew of Harry’s war; and saved me from a potential howler.

The Artists Rifles was one of three London Territorial units earmarked as officer-training units as well as serving on the front line. The majority of men who joined had an ambition to be commissioned as an officer and to be posted to another regiment. For whatever reason, Harry was not selected for a commission.

The medical classification was Category C2: ‘free from serious organic disease, able to stand service conditions in garrisons at home.’ Harry was considered fit for Home Service only; he never went abroad, and he never fought. To my disappointment the Eastern theatre of war was the military district in the East of England, not, as Patrick said, ‘somewhere east of Suez.’

After enlisting Harry was immediately posted to the 2nd Battalion, who were deployed at Hare Hall training camp at Gidea Park in Essex. They were used to train reserves for the 1st Battalion who were fighting in France and other potential officers. The camp, seen in these wonderful photos shared by the Artists Rifles Association, trained over 10,000 officers from 1914 to 1918.

Harry remained at Hare Hall until he was demobilised. I wonder how often he managed to return to his family in East Finchley; much easier from Essex than the Western Front or Mesopotamia after all.

After the war, Harry continued to live in north London. He died on 22 January 1955 and is remembered at St Mellitus.