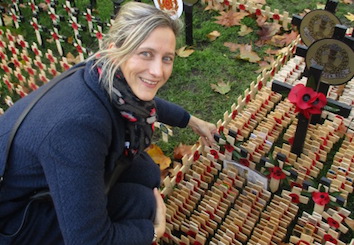 In September 2018, I picked up a flyer at St Mellitus Church. It invited parishioners to join a new research group tracing local soldiers who died in the First World War and are commemorated on the historic Hunter organ donated to the church in 1920. ‘This is a great opportunity to learn some new skills, help rediscover some long-forgotten stories and support the restoration of our amazing organ,’ it read. That was how I came to know Private Henry Cross.

Henry was the first fallen soldier I was assigned as a researcher, and my first glimpse of him came in the 1911 Census. He was 31, married to Maria Alice, father of two young daughters, Alice Lilian Amy and Ethel Marie, and working as an electric tram car conductor for Metropolitan Electric Tramways.

He never appeared in another census. He enlisted for war duty in Edmonton and joined the 3rd Battalion of the Middlesex Regiment (Duke of Cambridge’s Own). Forces War Records show Henry’s battalion were serving in the Battle of Bellewaarde Ridge, part of the Battles of Ypres, from 24 May 1915 to 26 September 1915. On the first day, the German army staged a widespread gas and infantry attack on British troops and it is highly likely that during this action Henry received his fatal injury.

He died of his wounds in France on 28 July 1915. He was 35 and his daughters were nine and four. Maria would have been sent a memorial death plaque after the war to commemorate her husband.

Research becomes addictive; turning pages and checking websites with interest to delve into the chapters of a soldier’s life, and soon the Transport for London Archives made Henry’s working life before the war become more than just words on a census.

I discovered that he is also commemorated on the Underground War Memorial at 55 Broadway SW1, where London Transport had its headquarters until January 2020. The memorial was unveiled almost 10 years after his death, on Wednesday 10 June 1925, with Henry’s name listed as Cross H, one of 1,450 servicemen listed who worked on the Underground or for its associated companies.

The same day a memorial service for the members of staff who died in the First World War was held at St Margaret’s, Westminster, the parish church of the House of Commons. Henry’s widow, Maria Alice would have been invited, and in the Transport for London archives I found moving details of both the service and the unveiling of the memorial.

In November 2018, the centenary of the end of the First World War, it seemed poignant for me to visit the Garden of Remembrance and plant a cross in memory of Henry. I located his regiment, made a conscious effort to search for a cross already planted for him, maybe by one of his descendants, but could find none. So I wrote his name clearly at the top of the cross, with details of his service, and planted it among his regiment. Perhaps someone connected to Henry visited the garden and saw it. His name would certainly be seen by visitors: We Will Remember.

I planted another on behalf of the St Mellitus memorial in the plot of a regiment that had fewer crosses. It felt fitting to acknowledge not just Henry but all the servicemen commemorated at my church, some of whose histories and even regiments were still unknown at that point.

I have now researched seven fallen soldiers from our memorial. I refer to them as ‘my soldiers’. It is amazing how being part of this research project has made these men become a part of my life in a personal way, and how I feel a duty to make sure their story is recorded as accurately as possible.

As a Londoner and a frequent user of public transport, I have passed war memorials dedicated to workers at many stations. These have taken on a new, personal connection now I have discovered the personal history of an employee from the past.

The flyer lived up to its promise. I can confidently say that my skills and appreciation of the history of St Mellitus have been enriched. When I attend Mass, I frequently look at the names of the soldiers I have researched, and as ‘my’ first, Henry Cross is a name to which I am drawn like an old friend. Although I don’t have a physical picture of him to reference, I have a picture of his story. Henry Cross: Londoner, husband, father, soldier and forever valued member of our local community parish.

On Remembrance Day 2020, as the centenary of the Hunter memorial organ at St Mellitus approaches, we invite you to remember the 221 soldiers in whose memory it was built.  The newly restored organ is sounding wonderful; you can hear it by clicking on the soundfile below. James Orford, Organist in Residence at Westminster Cathedral, plays Charles Hubert Hastings Parry’s Chorale Prelude on “Eventide”. Take a moment to reflect and remember Henry Cross, the other New Court soldiers and all those who serve to defend our democratic freedoms and way of life.