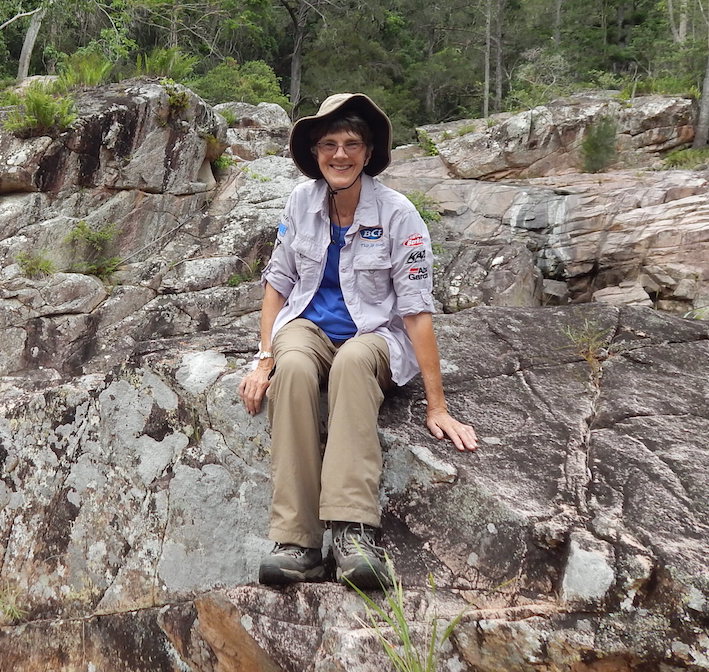 Prue Roberts, granddaughter of Percy and grandniece of Alfred Alford 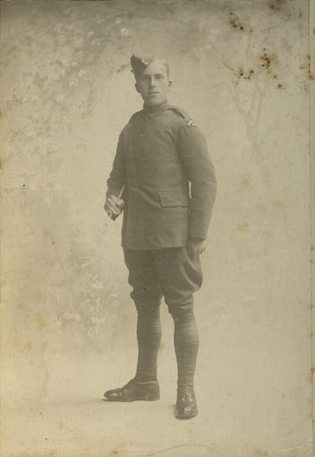 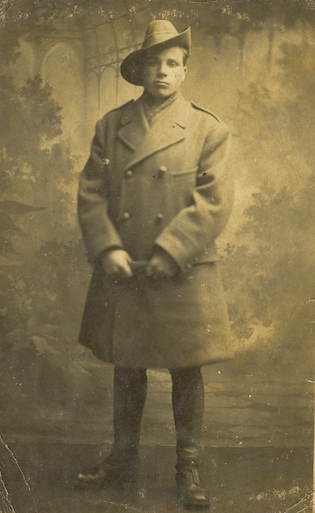 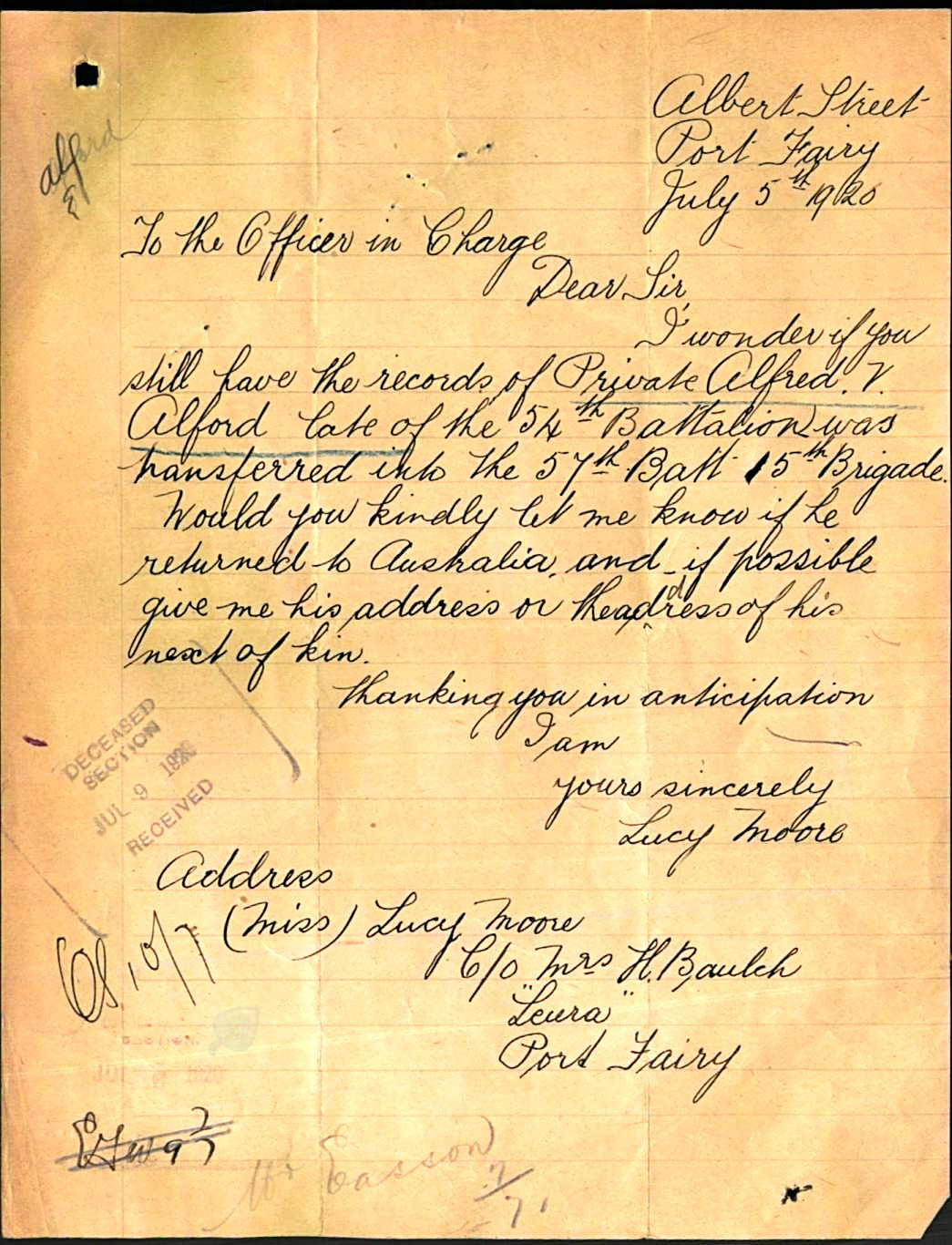 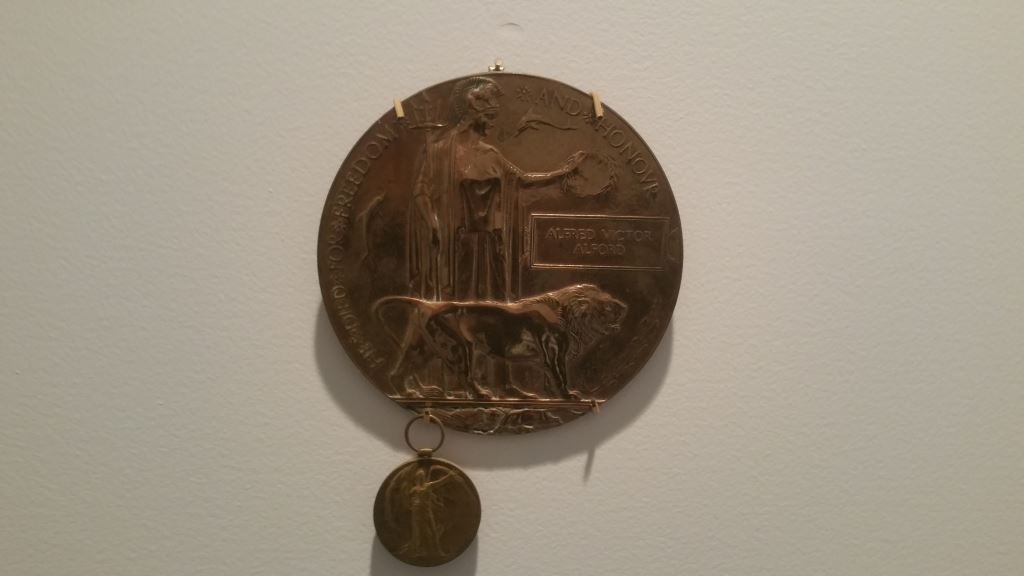 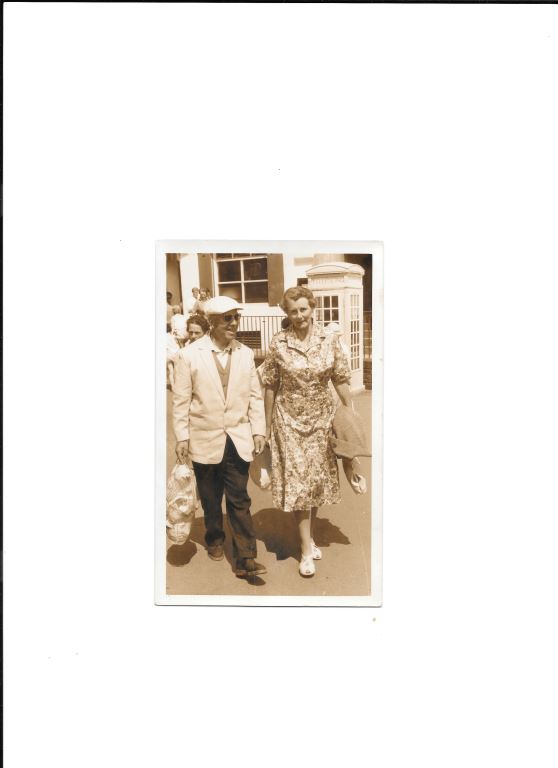 Percy & Ethel on holiday in the Channel Islands

When I emigrated to Australia in 1974, my grandfather Percy came to see me off at Heathrow. I have fond childhood memories of visiting him and my grandmother Ethel at their house in Trinder Road, Barnet. I recall Percy loved a good roast dinner, certainly knew a good whisky, and was a great card player. “Many a poor man is walking the streets of London through not leading trumps,” he told me.

I was surprised and delighted then to receive an email last summer telling me Percy and his brother Alfred, my great-uncle, had been commemorated at St Mellitus, and inviting me to share their story.

Percival John Alford, always known as Percy, was born in 1898 at 69 Thorpedale Road, Stroud Green, about five minutes’ walk from the New Court Congregational Church that is now St Mellitus. He was the youngest of five children born to William Alford and Rosa (née Hutton), and had three brothers, Delbridge (Reg, born 1891), Albert (Bert, 1896), Alfred (Alf, 1897), and a sister, Rosie (1893).

Percy remembered his childhood as a happy time. His hard-working parents put plenty of wholesome food on the table and the family made their own entertainment, spending Sunday evenings around the piano as Rosie played and everyone joined in with a singing piece.

William drove a horse bus, then a hansom cab and eventually owned his own horses and cab. By 1911 times were hard for the family and the introduction of the motorised taxicab forced William to sell his horses. At one point the Alfords moved to Mount Pleasant Road (now Mount Pleasant Crescent) in Stroud Green. Meanwhile William, ever adaptable, learnt to drive a taxicab himself.

The next year Percy left school, at the age of 14, and started work as an office boy at L Ramsey & Sons, manufacturers of ironmongery. He was a quick learner and was promoted to junior invoice clerk after six months, which increased his pay to nine shillings a week.

By December 1913, Alf, 16, embarked on the SS Marathon bound for Melbourne, Australia as part of a scheme for poor children, where he worked on a farm in the Port Fairy area of Victoria. Back in London, Reg was working as a butcher’s assistant and Rosie was a clerk at the Share Registry.

When war was declared in August 1914, Reg joined the 19th (County of London) Battalion (St Pancras) of the London Regiment within a few days. Percy, who turned 16 in July 1914, joined the Middlesex Regiment on 17 August 1914, giving his age as 17 and without the permission of his father. In Percy’s words: “I never dreamt I would be thrust among such a rough lot of men. Many of them could not read or write and I used to write letters home to their wives for them and read the replies to them.”

Three months later, in Australia, Alf said farewell to his sweetheart, Lucy Moore, and enlisted in the Imperial Force 5th Battalion, 4th Reinforcement at Broadmeadows, Victoria. Bert also joined up, so all four boys were in the Army. William wrote to Percy’s commanding officer in June 1915 requesting his discharge on the grounds that he was too young to have joined up.

“It is a great anxiety to me that my youngest boy might be sent to the front,” he wrote. “Three others of my sons (in fact all of them) are in the Army. One somewhere in France, one in the Dardanelles and one yet in England under training.” Percy was discharged in June 1915.

Meanwhile Alf had travelled on the SS Wiltshire to Gallipoli, disembarking on 27 May 1915 at Anzac Cove in Turkey. After months of fierce fighting against the Turks, the troops were withdrawn to Tel-al-Kebar, near Cairo, Egypt, in December 1915. Alf spent some time in hospital in Heliopolis during this period. He was transferred to the 54th Battalion in March 1916, then embarked on HMT Caledonian for Marseilles to fight in France. His battalion was posted to the Somme and fought at Fromelles. He was a Lewis gunner.

Young Percy joined the Royal Flying Corps in October 1915 and trained at Farnborough as a wireless operator. He received 14 shillings a week and gave half of it to his mother. He and Alf were reunited at Christmas in 1916 when Alf came home on leave. Reg and Bert were in France. Alf saw Percy off at Waterloo station just after Christmas and that was to be the last time Percy saw his brother.

Having passed his exams as a wireless operator, Percy was sent to France in February 1917, embarking on the SS Archangel at Southampton and crossing the English Channel at night to Le Havre, before continuing along the River Seine to Rouen and then to Bruay. April 1917 was known as “bloody April” because of the number of casualties in the air battles.

He was then sent to Newport Baines on the coast of Belgium and at the end of 1917 was at St Quentin, France, the extreme south of the British lines. After a very severe winter, the Germans mounted their Spring Offensive on 21 March 1918, beginning with Operation Michael, and Percy was buried in a deep dugout and suffered from gas fumes. He was sent by train via Paris to Vichy in the South of France to hospital and then to a convalescent camp in Rouen.

Percy had no idea that his brother Alf had been gassed at Villers Bretonneux and was in hospital in Rouen at this time. Alf died of his wounds on 26 April 1918, only four days before his 21st birthday. He is buried at St Sever Cemetery, Rouen and also appears on the Roll of Honour at the Australian War Memorial in Canberra.

Lucy Moore did not know that Alf had died in action. The Australian Service Records contain three touching letters, written by her to the authorities in 1916 and 1917, asking for an address for Alfred as she had not heard from him. They also contain a letter she wrote in July 1920 with another plea for the authorities to let her know if Alf had come back to Australia. An officer replied with the news that Alf had died more than two years previously and his next of kin in England had been informed.

Reg was awarded the 15-star medal and returned home safely, as did Bert. Percy was discharged from service in October 1919 on compassionate grounds because his mother was dying of cancer. He went on to be a taxi driver, joining Reg and Bert who had already completed “the Knowledge”.

Percy married Ethel Payne in 1923 and they had three children: John, Michael (my father) and Julie. He died in 1980, leaving his body to medical science. The grandfather clock that was in Percy’s home until he passed away is now in my home in Central Queensland, together with the memorial plaque for Alf issued to the next of kin of soldiers who lost their lives in the Great War. This plaque is known as the Dead Man’s Penny. These are precious reminders of Percy and Alfred.

Over the Christmas break I discovered a cassette tape made by Percy, probably in the 1960s or 1970s. It is a recording of the ‘Life Story of Gracie Fields’. At the end of the programme, Percy speaks on the tape about how it brought back personal memories for him; he recollects taking ‘Gracie’ as a passenger in his taxi cab sometimes. He refers to ‘mother’, the name he always called his wife Ethel. This tape was kept by my parents after he passed away and now I have it.

You can hear Percy speaking below: