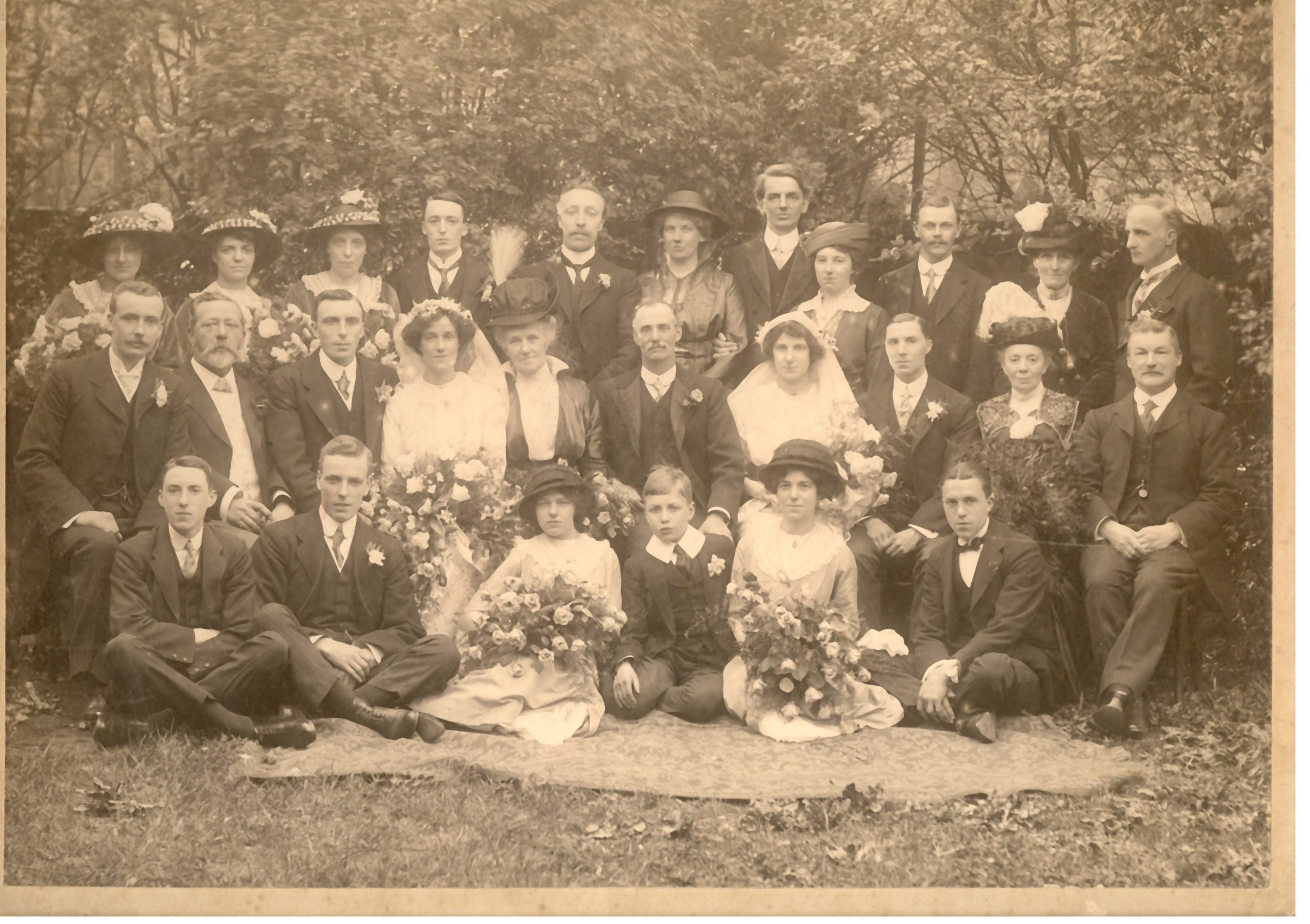 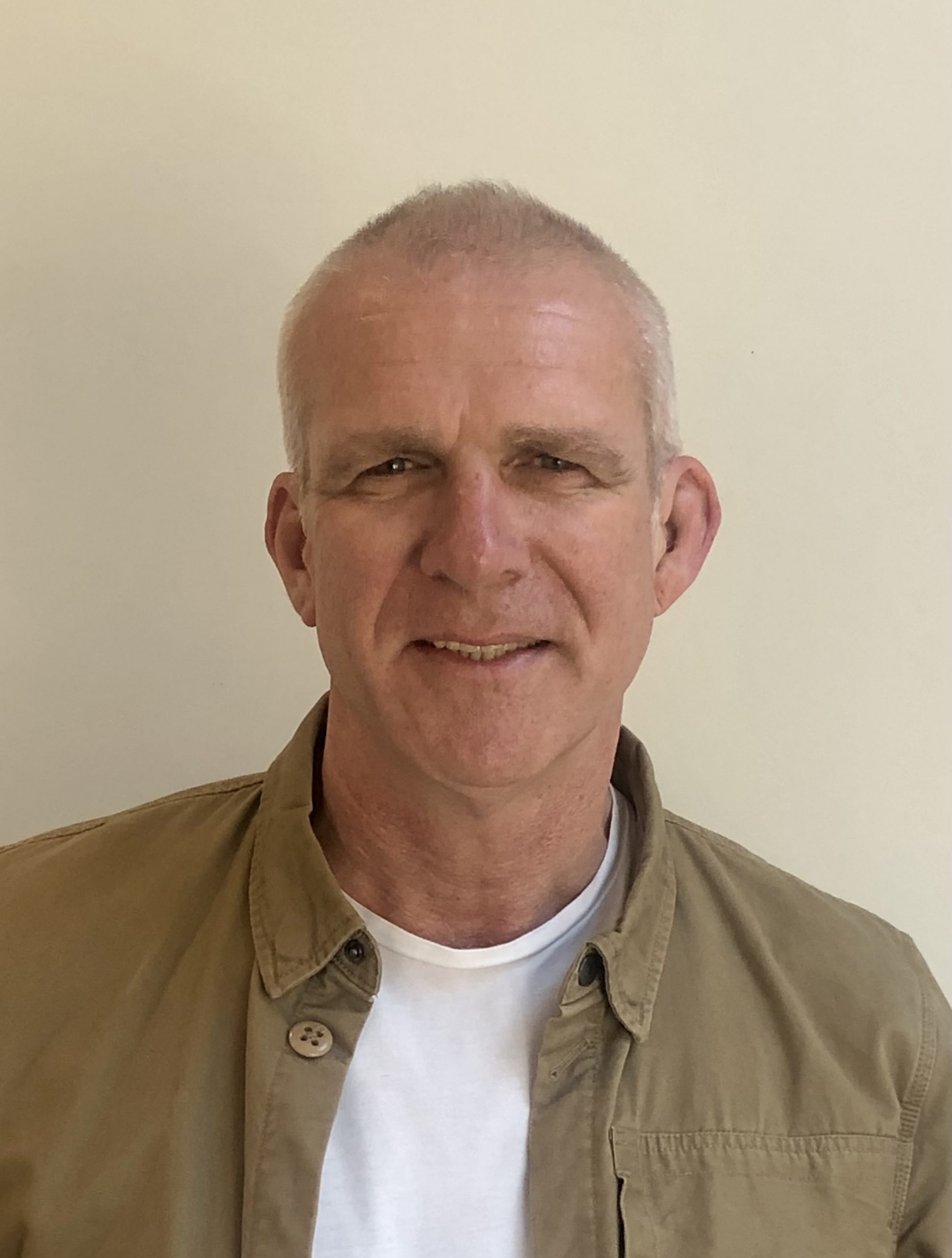 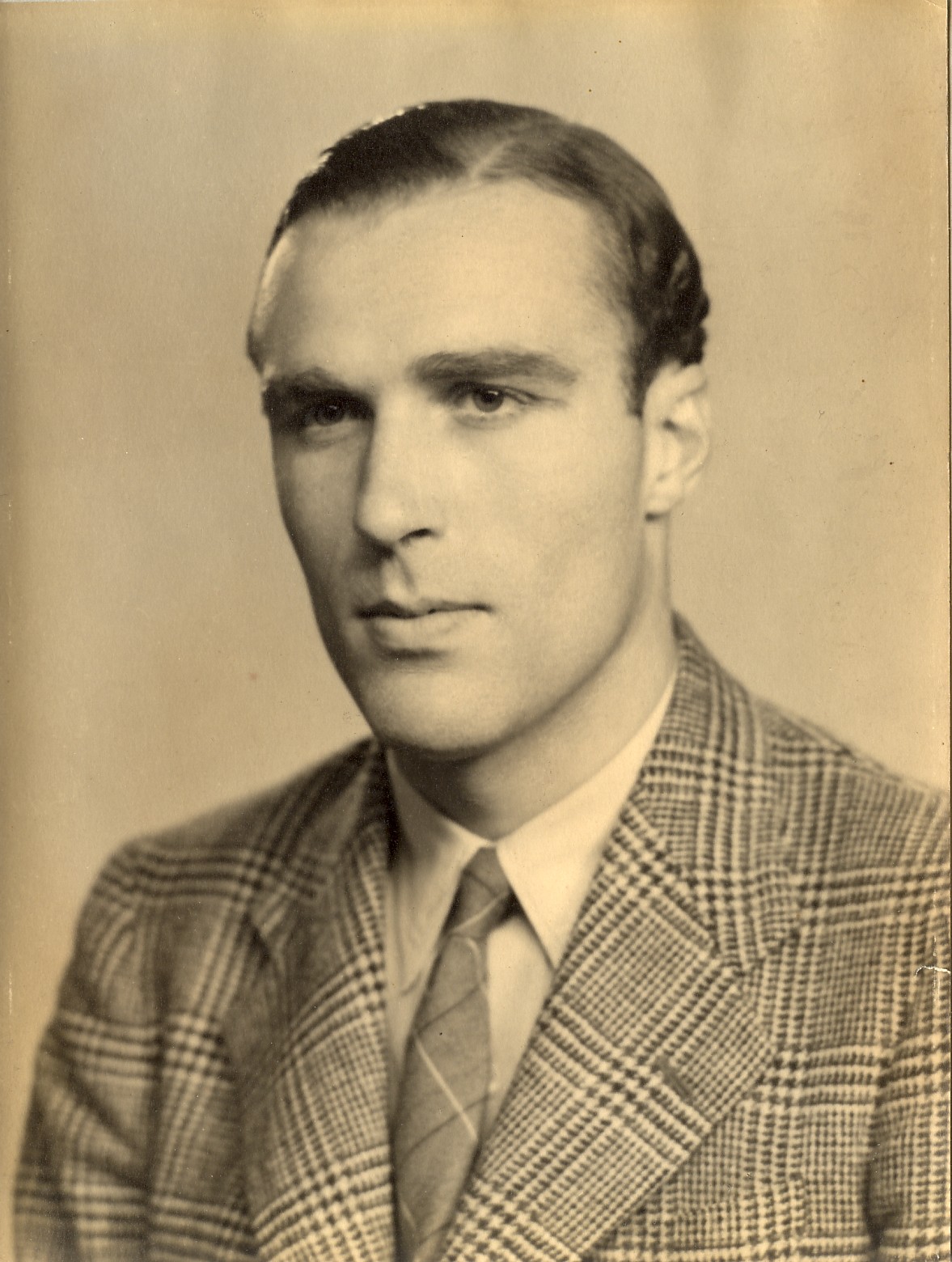 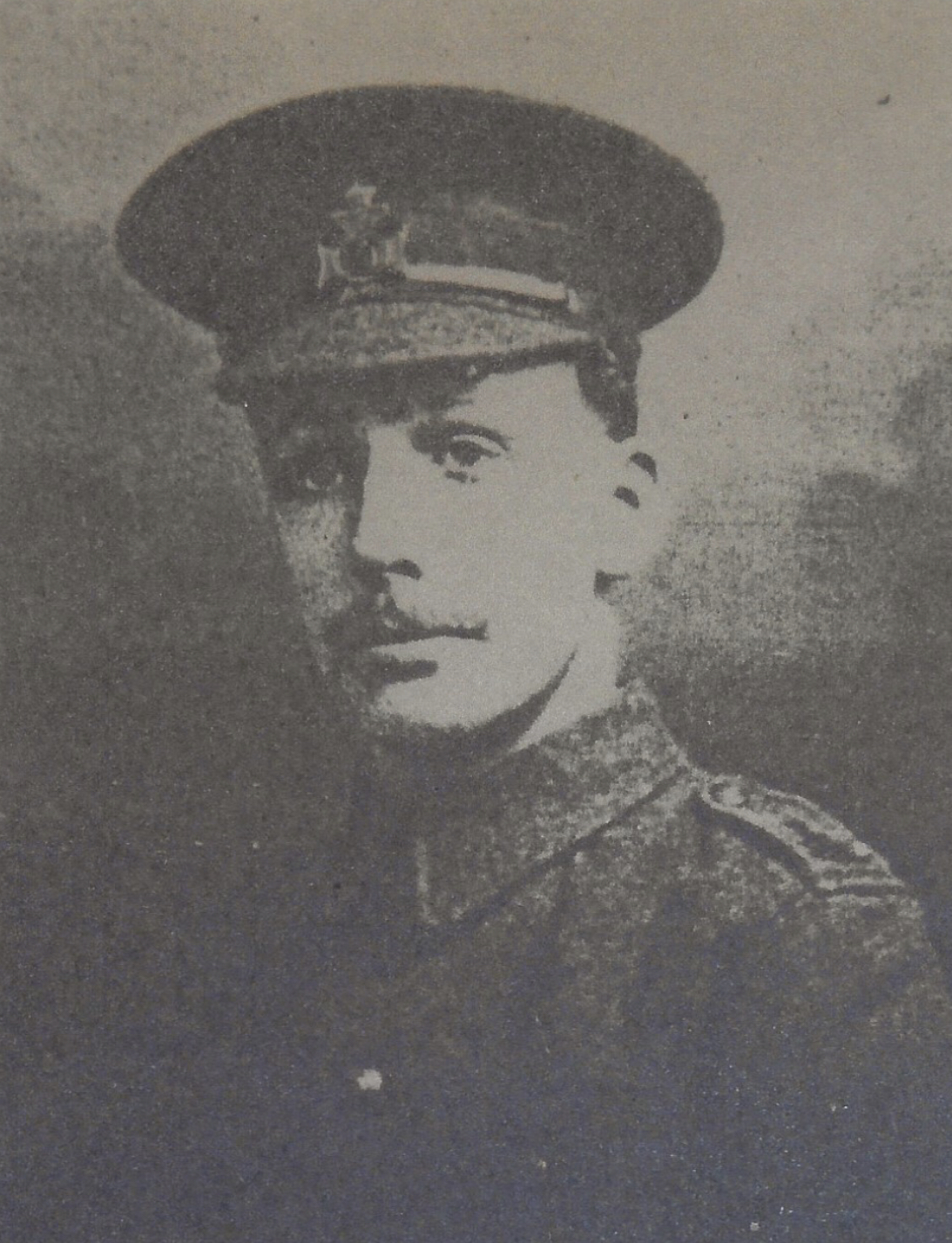 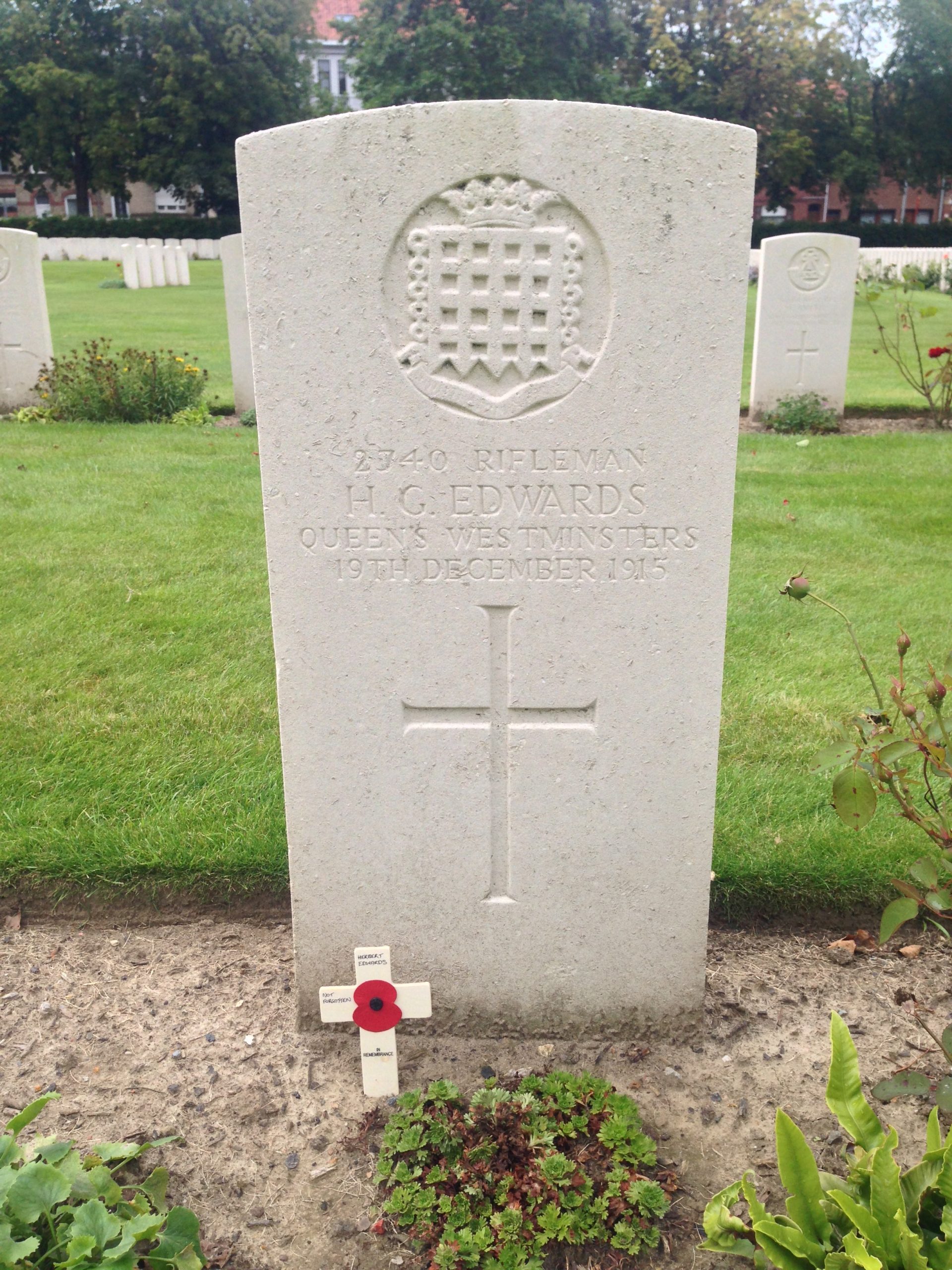 The gravestone of Herbert Edwards in Ypres Reservoir Cemetery, Belgium 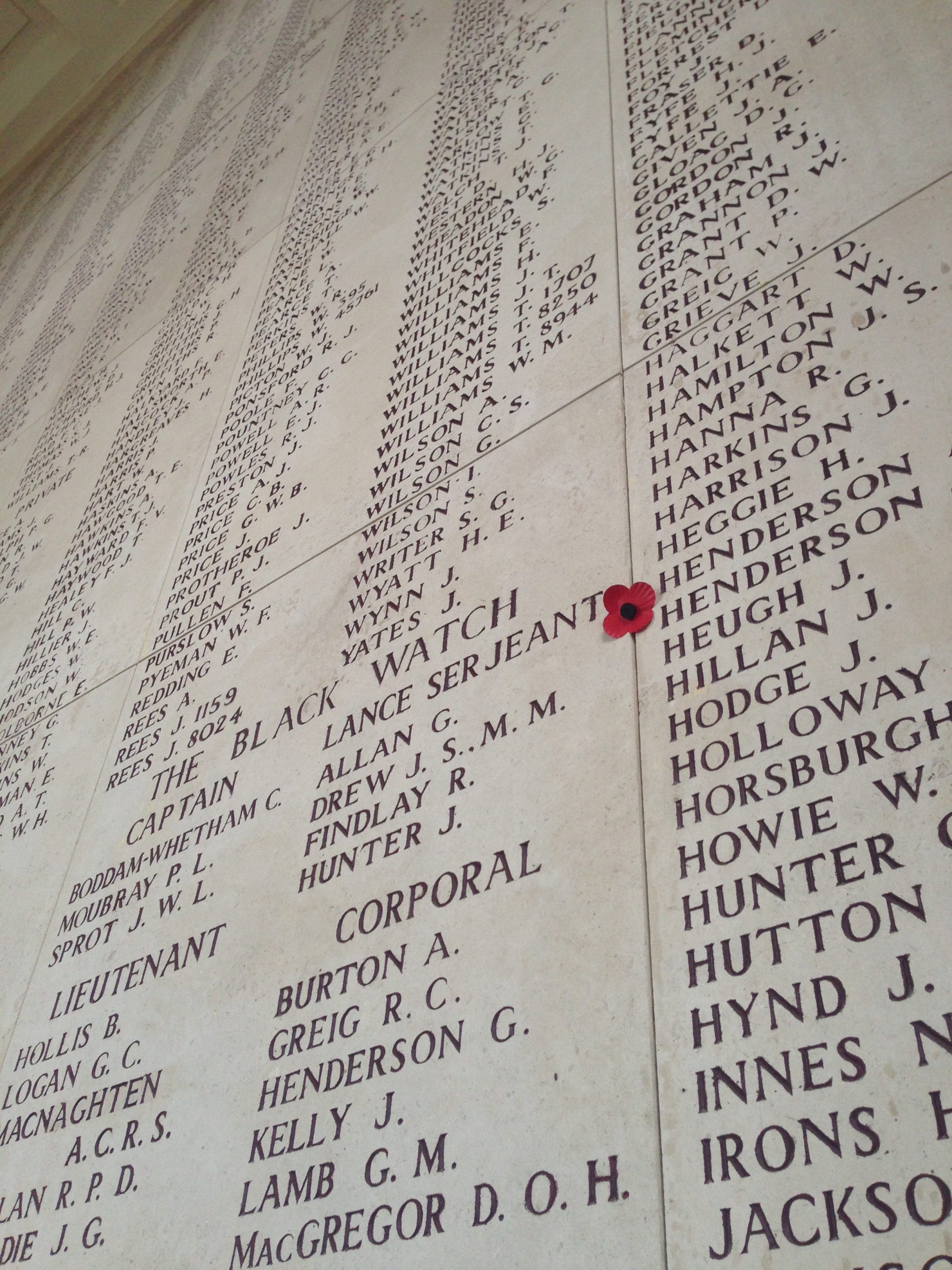 Menin Gate Memorial to the Missing in Ypres, Belgium 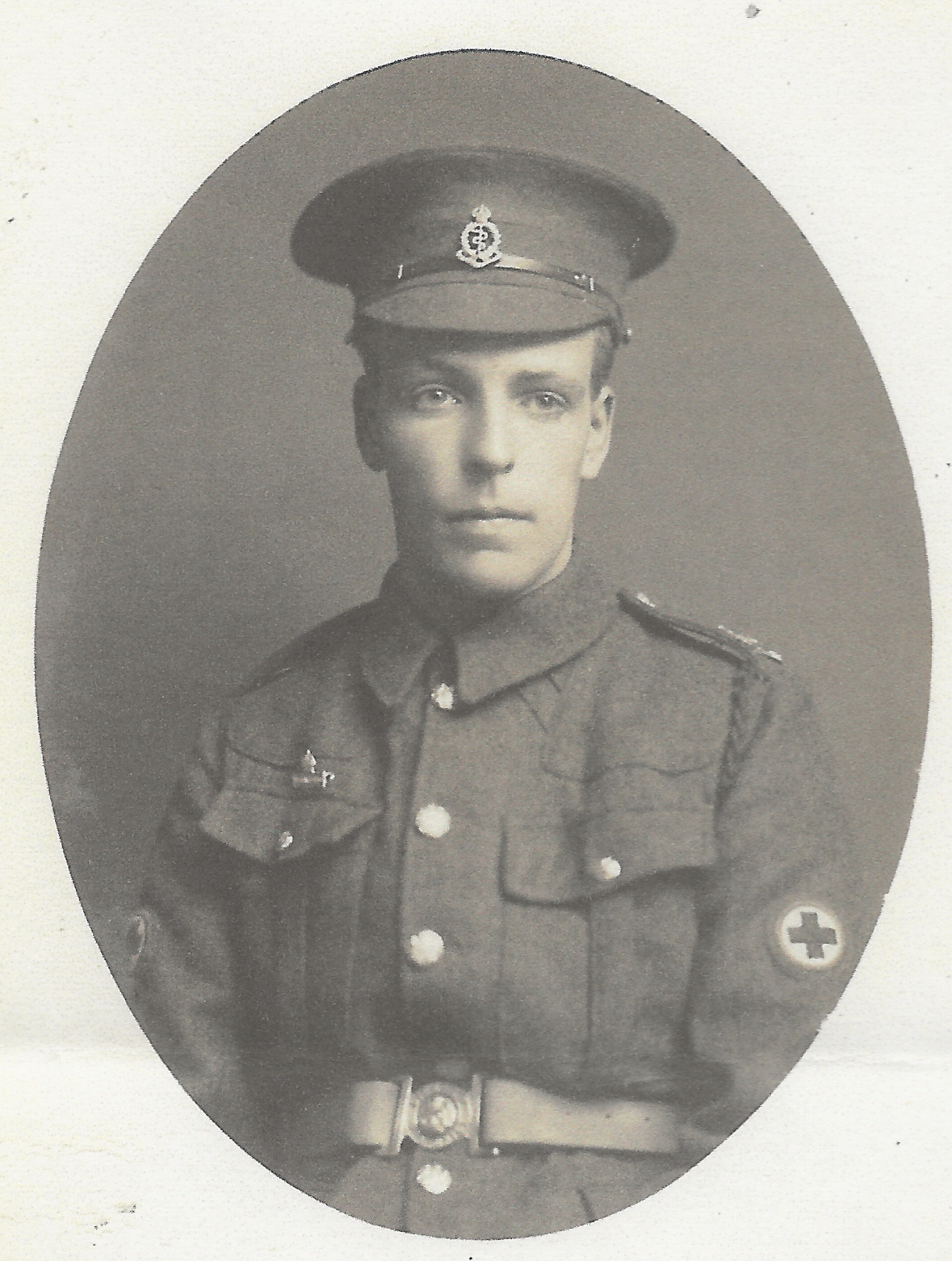 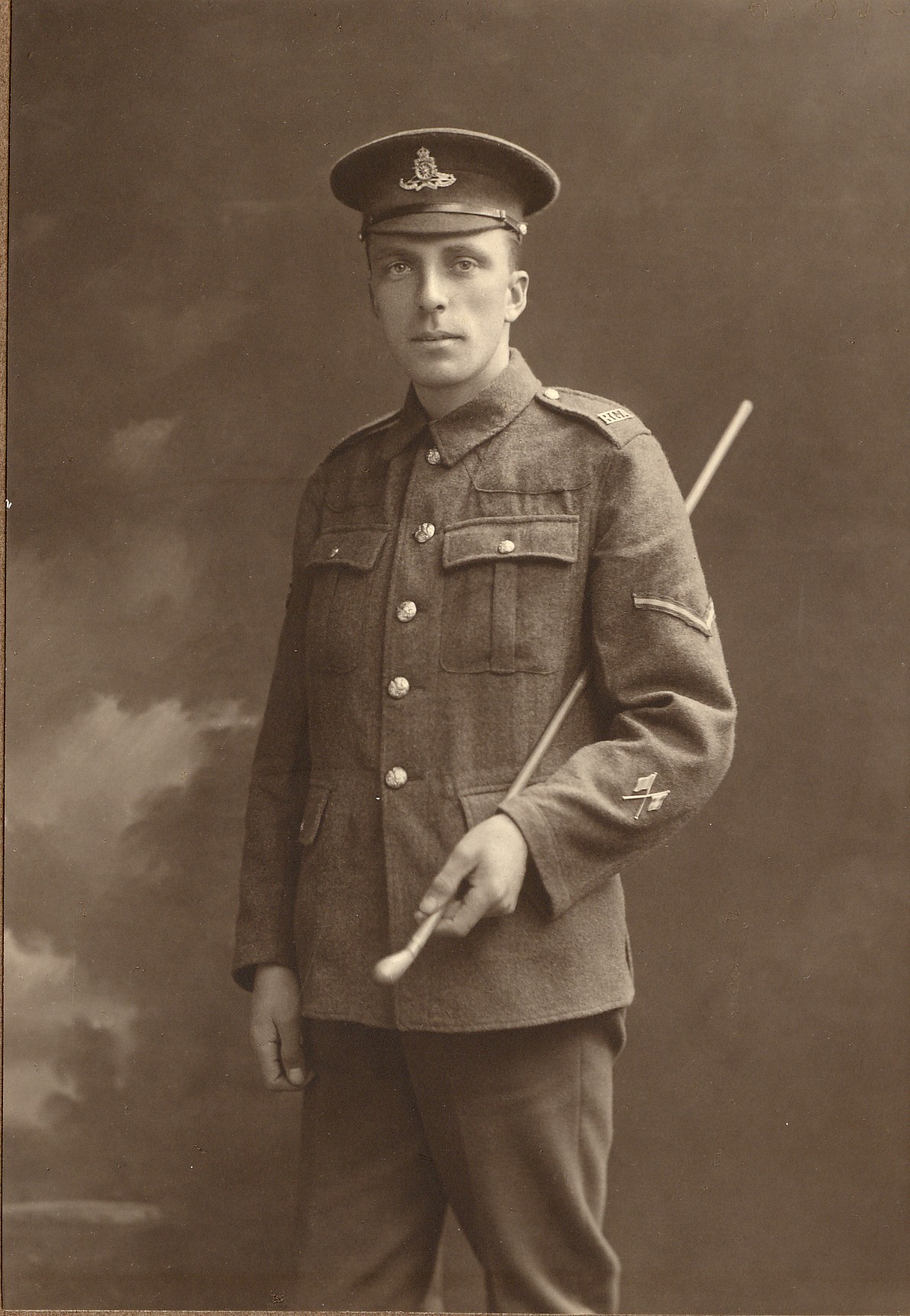 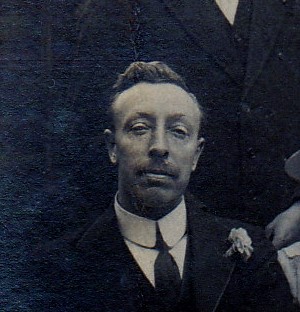 My great-uncles Herbert and John Edwards are among the soldiers commemorated by the Hunter memorial organ at St Mellitus, or New Court as it was in their day. They were men from the parish who served in the First World War, but their stories went further and deeper than just regiments and postings. They tell of family, community, humanity and the emergence from the darkness of time.

My father wasn’t one for talking much about his past. We knew the house where he was born, where he had grown up and where he had gone to school. In contrast we knew almost everything about my mum’s family – the names of all her relatives, what they liked to do and even what some of their pets were called. In addition there was the sheer amount of ‘stuff’ that embellished her family’s history – furniture, photos, books, all sorts. With my dad there was virtually nothing (I think we have a few photos and a tray!) and when he died almost 30 years ago, the chance to find out more seemed lost.

That’s how it stayed for at least another 15 years, until by chance the name Herbert Edwards popped up – almost certainly from my mother and probably because my brother Chris had paid a flying visit to Ypres. Herbert was a great-uncle on my father’s side and he proved to be the starting point of my investigation into that side of the family that led me to the St Mellitus Organ Restoration Project.

Herbert’s details were quickly found on the Commonwealth War Graves Commission website, and in August 2014, spurred on by the 100th anniversary of the start of the First World War, we visited his burial place at Ypres Reservoir Cemetery in Belgium.

In September 1914, aged 24 and only a month after the outbreak of the war, Herbert enlisted with the London Regiment. He served as a Rifleman in the 16th Battalion (Queen’s Westminster Rifles) and was sent to France in July 1915, then on to Flanders and Ypres. There he was killed in action on 19 December 1915, during a German gas attack on a day of heavy shelling from both sides.

Ypres is a lovely place to spend a long weekend, but it is full of shadows from the war. Visiting the Menin Gate, it was hard not to reflect on the long lists of names of soldiers who have no known resting place (see photo) and the wider implications of each one of the deaths; the grieving felt by the mothers, fathers, sons, daughters, friends, colleagues, and communities.

After visiting Ypres, I took a rest from exploring my dad’s side of the family, but the First World War Centenary in 2018 began to stir my curiosity about Herbert’s siblings. I knew that one of them was my grandfather; Leonard, but who were the others and what had they all done during the war?

I signed up to ancestry.com and, importantly as it turned out, took a DNA test through the site that was linked to the Edwards family tree I had started to build.

John’s military records showed that he enlisted in April 1915 at the age of 23. He served as a medical orderly with the 3rd London Mounted Brigade Field Ambulance (see photo) and found himself at the heavy fighting at Gallipoli in Turkey that year. Following that campaign, he spent time both in Cairo, Egypt, and Thessaloniki in Northern Greece. Before finally coming home in mid-1919, he was also a Rifleman with the King’s Royal Rifle Corps in the Sinai and Palestine campaign in the Middle East.

Almost as soon as he returned from the war, John married Lillian Franklin, who lived next to New Court in Evershot Road. They later moved to Finchley and he ran his own pharmacy. Lillian’s brother, Ernest Franklin, served in the Royal Navy and is one of the returning soldiers honoured at New Court.

Companions on my journey

Having learnt about Herbert and John, the two other brothers, Stanley and my grandfather Leonard, remained a mystery. Their records seemed either to have been destroyed or just could not be found.

That’s how it remained until one Sunday morning in late 2020. I was idly skimming through apps on my phone when I noticed an ancestry.com message from two years before that I had missed, from a man called Mark who was building his own family tree and said he was a descendant of Stanley.

Mindful that I might also have missed my chance to respond, I immediately sent him a message. To my surprise and delight, he replied. ‘Have the team at St Mellitus church contacted you?’ he asked. ‘If not, let me know and I can put you in touch and forward some info which may be of interest.’

That’s how I became aware of the St Mellitus Organ Restoration Project and it later transpired that one of the project’s researchers, Karen, had contacted Mark through ancestry.com.

I felt three emotions: amazement – I could not believe others had been researching my ancestors and that the information was available via the archive on the project’s website; gratitude that complete strangers had taken the time to research my ancestors to remember and commemorate them; and a sense of connection – not only was I finding out a lot more about my ancestors but they were suddenly placed in a community and that made them seem so much more human, so much more than just a list of names and a jumble of facts.

As a result, I happily shared all the relevant photographs I had of the family with the project (How could I not?) and in December attended the virtual screening of the Festive Centenary Concert from St Mellitus, at which the restored organ was played publicly for the first time.

One of the photographs I shared is of a double wedding that took place at New Court in April 1914, just a few months before the First World War. As I found out more about my family, I learnt that this happy day would have been touched by sadness because Charlotte, my great-grandmother and the father of the four boys, had died only nine months before and is clearly missing from the group.

The image makes me feel a remarkable connection to the individuals and the community to which they belonged. It shows my grandfather, Leonard, who had moved to the Liverpool area for work (he was a produce merchant manager, possibly working in the sugar industry) and his bride Lily Standing, who lived no more than 20 minutes’ walk from the church.

The other couple getting married are Lily’s sister Gladys and Fred Melville. Lily’s other sister, Edith, had already married in April 1911, and her husband Arthur Heaven was another soldier associated closely with the church, where his father Edwin was the treasurer. Arthur had a brother, Norman, who also enlisted in the Queen’s Westminster Rifles and was killed in action in 1918.

Charlotte and her husband John had raised the family in Ennis Road, a short walk from New Court. John was a warehouseman and evidence suggests they led a comfortable life. As well as four sons they had a daughter called Beatrice May – I used to call her May – a schoolmistress who had moved to Suffolk. Stanley, the oldest son, was a stockbroker’s clerk who had married Flora Pink and moved to Muswell Hill. Herbert and John still lived at home and worked as clerks. All these people are in this amazing photograph.

Leonard was 26 when he joined the Royal Garrison Artillery (RGA) as a signaller at the start of the war (see photo). He was stationed at the RGA Signals Training Centre at Bettisfield Park on the Wales-Shropshire border where he would train signallers before travelling with them to the Western Front. The RGA was one of the forerunners of the Royal Artillery and during the war it manned the heavy guns and howitzers. In addition to establishing lines of communication, signallers were also used in vulnerable forward positions to assist the artillery and provide information on enemy targets.

Stanley (see photo) was 38 when he enlisted early in 1915. He joined the Royal Naval Volunteer Reserve Anti-Aircraft Corps and then the Royal Naval Air Service where he was an Air Mechanic (1st Class) at the Kite Balloon Training Base at Roehampton, south-west London. Balloon squadrons played a vital but unglamorous and largely forgotten role in the war, their tethered kite balloons being used for spotting for artillery and for observing enemy movements across the front.

Neither Leonard nor Stanley were commemorated at New Court, probably because they had left the parish before the war. But one of Stanley’s brothers-in-law, John Pink, Flora’s brother, appears on the plaque and his story is told in more detail elsewhere on this site.

Christmas 1915 must have been a challenging time for my great-grandfather John Edwards. His wife’s death was probably still on his mind, his only daughter had moved away, Herbert had just been killed in action, John was in Gallipoli, Leonard was travelling to the Western Front and perhaps only his eldest son Stanley was in relative safety. He would not have known that he would never see his son John again – his death in January 1919 preceding John’s return from the Middle East to marry Lillian.

Reflecting on all this demonstrates the value of this journey for me: I’ve gone from knowing virtually nothing of my relatives to hearing a single name – Herbert Edwards – and developing a broader understanding of the social web and society that bonded these individuals. And this bond goes further than just the family of John Edwards, stretching beyond the siblings and cousins to New Court Congregational Church and the wider community that must have been so important to them.

It may sound clichéd but I have found researching my ancestors to be a journey, one consisting of rapid and slow progress, amazing rewards, uncertain destinations, ineffective route finding, piecing together clues, educated guesses and unexpected fleeting connections such as Mark.

The St Mellitus Organ Restoration Project strikes me as unique, and has been more than just a passing companion on the journey – it has been a real lightning-rod for my interest in this part of my family. Not only has it has greatly helped me with additional leads and information but, perhaps more importantly, it has given me a much stronger sense of their community, and it has helped me empathise more completely with the lives that my ancestors lived.

The journey continues with my research into the Edwards family. It has been greatly enriched by my involvement with the project and I am very thankful for that.